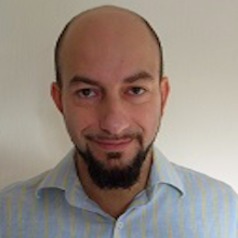 I received a BSc (110/110 Cum Laude) degree in Computer Science from Bologna University, in 1999, and worked as a software developer and project manager in the software industry before returning to academia and receiving a PhD degree from University College Dublin (UCD), in 2009. Between 2009 and 2011 I was a postdoctoral researcher in UCD, where I worked in the Adaptive Information Cluster (AIC) and in the Insight Centre for Data Analytics. I have been co-principal investigator on a number of European/National projects in the area of embedded sensor systems, wireless sensor networks and intelligent buildings spaces including the EU projects FIEMSER and HOBNET. In 2011 I initiated the FP7 project RUBICON (Robotic UBIquitous Cognitive Network), a 2.5 million EUR project (completed in 2014) that has posed the foundations for self-adaptive ecologies of robotic and sensing devices. I have successfully led an international scientific team exploring this domain, leading to numerous publications, open source software, industrial prototypes and demonstration systems in smart housing and transport. From 2014 to 2016 I was a Research Fellow with the Distributed Systems Group (DSG), School of Computer Science and Statistics.

I joined Heriot-Watt University, in 2016, as Assistant Professor, and I co-direct the MSc Robotics programme. At Heriot-Watt I, set up the Robotic Assisted Living Testbed (RALT), a 'Living lab', part of the UK National Robotarium, designed to facilitate design and testing of innovative and practical solutions for healthy ageing and indipendent living. I have also initiated the Cognitive Assistive Robotic Enviroment (CARE) Group, with a focus on enabling IoT and robotic, autonomous and interactive systems (RAIS) to provide user-centred assisted living support.

My research expertise includes robotics, human-robot interaction, autonomous agent systems, Internet of Things (IoT) and Ambient Assisted Living (AAL). I am currently involved in EU coordination actions developing new benchmarks for assistive robots (METRICS/HEART-MET), and I lead OpenAAL, an open lab for AAL. I am also one of the co-investigators of the EPSRC Healthcare NetworkPlus EMERGENCE, developing the UK roadmap for assistive robotics for frailty.

We would like to use third party cookies and scripts to improve the functionality of this website.ApproveMore info